The German Bundesgartenschau BUGA took place in Koblenz from April to October 2011. The gazebo called "Echolot" referring to the echo sounding used to measure distances became a real crowd puller. The walk-in structure consisting of approximately 6,000 members made of Douglas fir was designed according to principles of bionics.

of bats in the course of the construction work on the BUGA, it was necessary to intervene in the habitat of the bats. Careful intervention was the ultimate goal. The Koblenz University of Applied Sciences took up this topic as a design basis and designed the pavilion according to the principles of bionics. The floor plan of the structure shows the sound pressure level depending on the time of the location calls of the noctule bat (native bat species). Since these echo location calls are not audible for humans, they were displayed in advance as an oscillogram with music editing software.

Based on this floor plan, a double-layer hanging support shape was modeled with the program system "EASY". Such shapes are common in nature because they transfer the loads optimally. The hanging shape was divided into parallel sections in three planes, each at an angle of 60 ° to each other. Thus, spatially stable triangular and hexagonal grids were created, which are also often found in nature (honeycombs, diatoms, flower shapes, etc.). The refinements of the mesh grid, also following the principles of nature, depend on the magnitude of the static load in the respective area. The choice of the material of the supporting structure fell on the natural and renewable material wood. It is recyclable and has a positive ecological balance. In addition, the structure should be able to be assembled and disassembled by the students themselves.

Modeling and calculation in RSTAB

The generated cutting lines were imported into RSTAB via the dxf interface. In each section plane, a member network consisting of a top chord, a bottom chord and diagonal struts was generated. After applying loads to the structure, the calculation was carried out. After the design, each of the approximately 100 section planes was transferred from RSTAB to Nemetschek Allplan via dxf, where the detailed design was created. The RSTAB model was also exported to the Cinema 4D visualization program, where it was further processed graphically. 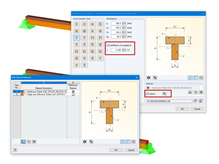 In timber design, beams are often built up of several timber elements. The individual elements can be connected by glue, nails, bolts, or dowels. A glued connection is to be assumed as rigid. In the case of dowel‑type fasteners, the joint is compliant (slip joint) and the cross‑section properties of the connected elements cannot be fully applied.
New Changing Boundary Lines of a Surface New Adjusting Result Values for Surfaces New Modeling a Purlin by Using Block Manager New Using Tsai-Wu Material Model (Orthotropic Plastic)

Different views of the residential building model in RFEM