The new roofing system for the petrol station of GULFIN Cameroun in Douala, an oil company, is a particular structure with eccentric columns and non-symmetric cantilevered 6.5 m long beams.

CASTI GROUP, a customer of Dlubal Software based in Cameroon, designed the structure, managed and monitored the construction site.

The engineering team of CASTI GROUP designed the structure according to the Eurocodes in RSTAB and in the STEEL EC3 add-on module.

The awning covers a surface of 130 m2. Columns are eccentric, connected to a 9 m long supporting beam. They absorb loads from the transverse beams which support the contour truss. The unbalance produced by the front and back non-symmetric transverse beams is reduced by the varying slopes on each side of the gutter.

The main supporting beam is a HEB 240 cross-section, columns are HEB 300. Chords from the trusses were at first designed in HEB 120, then improved in HEB 100 with the RF-/STEEL Plasticity add-on module, which allows for the consideration of plastic reserves of a cross-section.

The roof covering is made of translucent polycarbonate panels with double slope toward the central gutter supported by the main beam.

Both the production and assembly of the roof structure were made by a company specialized in steel construction. The investor opted for this company because of the complex assembly of this awning at a filling station. 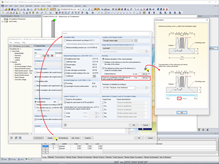 In RF-/FOUNDATION Pro, the user can freely select the proportion of the relieving soil pressure by means of the factor kred.
New Generating Member Load Using Free Line Load New Targeted display of results in RF-/FOUNDATION Pro New Interface with MS Excel/OpenOffice New Filter option for the result tables in the design modules

Rendering of the gas station

Model of the roofing in RSTAB

Deformations of the roofing in RSTAB

Rendering of the gas station

3D model of the supporting structure of the dry mixing plant in RSTAB (© www.dw-ingenieure.de)

Stress analysis of a module (© Bollinger+Grohmann)

Stage of the hall in Calais (© Julien Lanoo)