The new VoltAir office building in Berlin includes a 394 ft x 213 ft area and a height close to 98 ft. The building envelope consists of multiple box elements which form the interior and exterior corners.

The facade elements are suspended from relatively long cantilevers/outriggers fixed to steel brackets. The steel brackets are further fastened to the concrete floors by Halfen rails or anchors. Each box element has a height of approximately 26 ft, width of 8 ft - 10 in, a fixed support for the vertical and horizontal loads, and two additional roller supports for horizontal loads.

The model is a combination of member, surface, and solid elements with several releases and hinges to absorb tolerances and accurately model the slotted holes. The front T-sections (posts and beams) are modeled with member elements and the outriggers with solid elements to ensure a correct force distribution between the front beam elements and the secondary supporting structure. The brackets are displayed as surface elements.

The locations where screw elements intersect surfaces or solids, average regions have been defined to properly distribute the stresses. The anchor points utilize the concrete surface’s pressure points to withstand the large downward force due to self-weight. At the fixed supports, spring stiffnesses were defined to determine the allowable concrete stress and the tensile force acting on the Halfen rails. At the roller point supports, difficulties arose due to the relatively thin 8 in concrete floor, which was solved by modifying the direction of the stirrup’s slotted holes.

Rümmele Bauingenieur GmbH drew the conclusion: "The user-friendly interface of RFEM made it possible to easily make the necessary changes, which saved us a lot of time in finding practical solutions."

We Saved a Lot of Time and Found Practical Solutions

"RFEM's user-friendly interfaceM made it possible to make the necessary changes easily, saving us a lot of time and finding practical solutions." 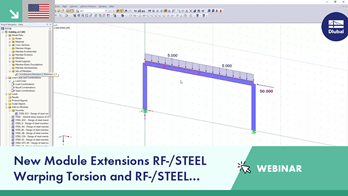 Webinar: Tips and Tricks Using the Navigator and the Printout Report in RFEM 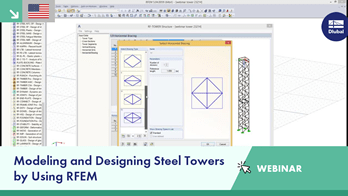 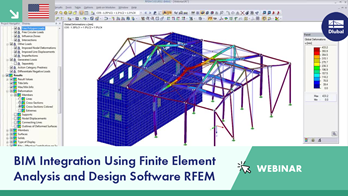 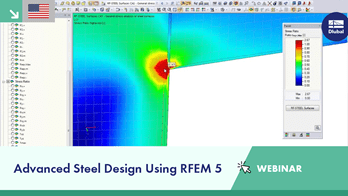 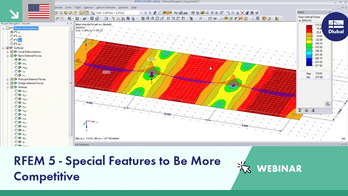 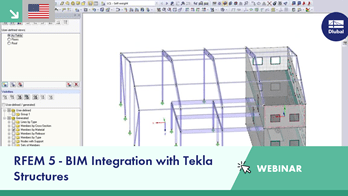 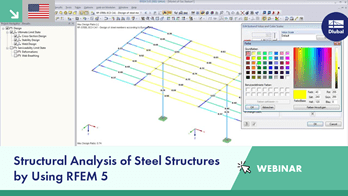 Crane with Cable on Pulleys

FEA Model of a Frame-Joint

This technical article analyzes the effects of the connection stiffness on the determination of internal forces as well as the design of connections using the example of a two-story, double-spanned steel frame.
Designing End Plate Connection of Hollow Sections Under Tension According to the CIDECT Method and by Means of the FEM Model Creating Lateral Intermediate Supports New CSA S16:19 Stability Considerations and the New Annex O.2 New Generating Member Load Using Free Line Load

Displaying Membrane, Bending or Other Stresses by Using Details Button in RF-STEEL Surfaces

Tension Forces in Cables After Form-Finding in RFEM

Stress analysis of a bracket

Deformations as the first result of an FEM calculation