If nodal supports are modeled on supported lines, this may lead to problems and incorrect definitions. Therefore, the following warning message appears in the plausibility check.
Figure 01 - Warning: Supported Nodes Lie on Supported Lines
Internally, the line supports and nodal supports are treated on each FE node. If there is a nodal support located on a line support, an FE node thus receives several support definitions. If the defined directions of the supports are not equal, this is not critical and the warning message can be ignored. If the same directions are defined several times, discrepancies may occur.
In the case of a line support that is failing under the tension and a nodal support on this line, the tension force thus results in the FE node which, however, counts to the line support and to the nodal support.
Figure 02 - Support Reaction when Modeling Nodal Support on Line Support
To avoid this behavior, it is possible to insert a short line without a support definition in the area of each nodal support. It may also be useful to model a tension bracket by using a newly defined member. The force transmission can then be adjusted by using the support of the member, the member type itself, and the member end release.
Figure 03 - Divide Line
Figure 04 - Additional Member as Tension Support
In general, the support stiffenings should be estimated in a realistic way; in the example, rigid supports were assumed as a simplification. In RFEM 5 and RSTAB 8, you can display the resulting support force related to the centroid of the model. It can be used, for example, to check the model and load data.

Moving Load Library According to AASHTO and AREMA Standards 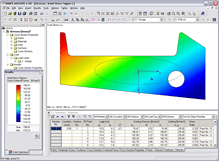