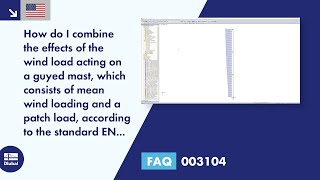 Chapter B.4.3 of the standard EN 1993‑3‑1 describes the equivalent static method to analyze the dynamic response to wind turbulence.

[1] To determine the effect of the wind load STM, the internal forces Sm from the mean wind loading are added to the response Sp depending on the patch loading. The patch loads describe the fluctuating wind components.