Impressive Structures Designed by Our Customers

Take a look at interesting projects designed with the Dlubal Software programs.

Interested in featuring your own project?  Send us the relevant information to be published on our website, newsletters, social media sites, and prominent magazines.

Feature your project on the Dlubal Software website and benefit your company.

On Al Yas Island, the biggest natural island of the United Arab Emirates, the Ferrari World Theme Park has been built as an amusement and leisure facility.

According to the design concept of Benoy, it includes a Formula 1 fitted circuit, a shopping mall of the size of 3,229,173 ft², condominiums, marinas and also several luxury hotels and two golf courses.

The park was built in two phases – phase 1 was completed in 2009, whereas the second phase was implemented in 2014.

The Ferrari World Theme Park is covered by a vast roof. The entire roof structure with a surface of about 2,098,963 ft² consists of a MERO spatial framework. With a total number of about 170,000 members and 42,200 joints, it is the largest spatial framework ever built.

One of the most modern power stations for energy production based on renewable resources can be found in Schwendi, Southern Germany.

Following the design of the Milan architect Matteo Thun, an architecturally sophisticated framework consisting of reinforced concrete, steel and timber has been created.

A new boiler house has been built for the biomass power plant in Berlin-Neukölln, Germany.

Engineering office Jürgen Ehlenz, the customer of Dlubal Software, was in charge of the structural analysis and design of the boiler house including the connection design.

The marina hotel is situated between Friedrichshafen and Lindau, on Lake Constance, one of the most attractive regions in Germany.

However, this exclusive location offers some challenges which must be considered in the structural engineering. For example, actions due to wind and earthquakes are considerably increased in the area around the lake.

The grate scaffolding of biomass power plant in Berlin-Neukölln, Germany, is a structure with a high temperature load.

The long-standing Dlubal customer, engineering office Jürgen Ehlenz from Beckingen, was responsible for the structural analysis of the grate scaffolding with moving parts as well as for the construction and design of piping.

Engineering office Jürgen Ehlenz, the customer of Dlubal Software, was responsible for structural analysis and detailed design of the conveyor bridge and other parts of the conveyor belt system.

The tripper car bridge is a part of the conveyor belt structure realized in Uzbekistan.

Engineering office Jürgen Ehlenz, the customer of Dlubal Software, was responsible for structural analysis and detailed design of the tripper car bridge and other parts of the conveyor system. 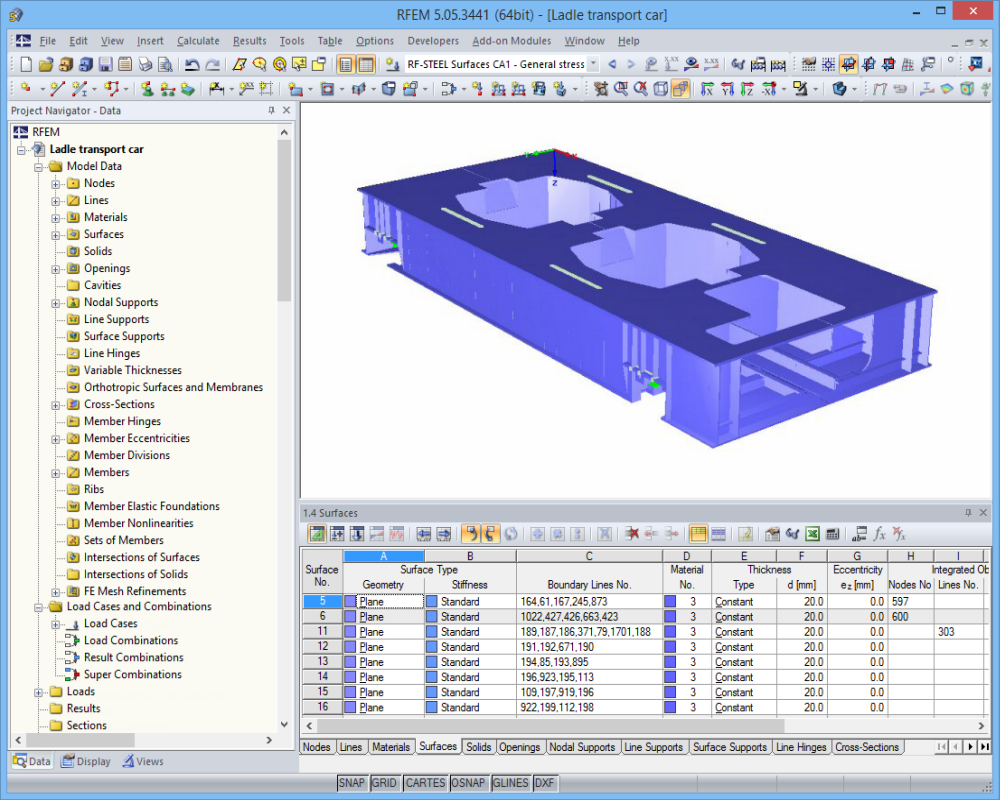 The ladle car transports two slag ladles, each with a weight of 90 t.

Traction drives in cars allow for motion without any assistance.

In addition to operating situations such as loads, motions, and settlements, also the construction stage has been analyzed.

The feed hopper is a part of the conveyor belt system realized in Uzbekistan.

Engineering office Jürgen Ehlenz, the customer of Dlubal Software, was responsible for structural analysis and detailed design as well as construction drawings of the feed hopper and other parts of the conveyor system.

For questions or concerns, contact our free technical support via e-mail, chat or forum, or find various suggested solutions and useful tips on our FAQ page.

Successful Project with RFEM and RSTAB

"The art project" Solhjul "was solved with the help of the programs RSTAB and RFEM as well as the good Dlubal support."

Reduced Costs Thanks to Dlubal Software

"We were able to conduct a very satisfactory structural analysis of our project and thus managed to optimize our material costs, we are happy."