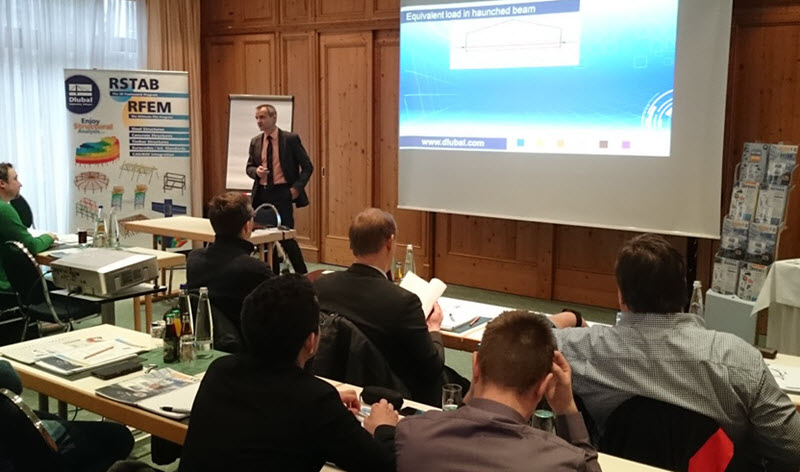 Presentation at the Dlubal Technical Seminar in Munich

German Annex to Eurocode 2 Presented at the Dlubal Technical Seminar

In addition to the long-established Dlubal Info Days, Dlubal Software organized the first technical seminar on prestressed concrete design on 13 January 2016 in Munich.

Special consideration was given to a good balance between specialized training and a presentation of program solutions. During the technical seminar, Dlubal also presented the new program versions of RF‑TENDON and RF‑TENDON Design with prestressed concrete design according to the German National Annex to EN 1992‑1‑1 (buildings) and EN 1992‑2 (bridges).

Theoretical Principles for Prestressed Concrete Design According to EC 2

The half-day event started with a specialist lecture by  Jaroslav Navrátil entitled "Theoretical Principles for prestressed concrete design according to Eurocode 2 in RFEM". The participants were informed on the effectiveness of the prestressing forces and on the determination of the equivalent load. This was followed by explaining the approaches for determining the necessary prestressing forces, among other things, according to the "Load Balancing Method" according to T.Y. Lin.

The calculation of immediate and time-dependent prestress losses as well as the correction of relaxation losses when assigning the prestress were also explained in detail during the presentation. Finally, Mr Navrátil discussed the particularities of prestressed concrete design in the single designs for the ultimate limit state design and the serviceability limit state design.

After a short coffee break, a practical example from building and industrial construction showed the work in RFEM and in the two modules RF‑TENDON and RF‑TENDON Design. A pre‑tensioning prestressed concrete beam prefabricated in the prestressing bed was defined in RFEM. With the roof generator from the RFEM tools, it was possible to generate the geometry of the roof truss, the external loads from snow and wind as well as the load combinatorics conveniently.

Afterwards, the prestressing strand and the non-prestressed reinforcement were defined in RF‑TENDON. The design of the roof truss was performed in RF‑TENDON Design. During the presentation, the seminar participants could see for themselves the intuitive entry in RFEM.

With the design of post-tensioning with a prestressed double-webbed T‑beam superstructure of a road bridge, a second practical example, now from bridge construction, was presented to the seminar participants. The calculation of the internal forces of the superstructure was performed as a three-dimensional finite element model in RFEM. Two main beams were defined as flexural members in the longitudinal direction over the whole length of the superstructure each with a T‑beam cross‑section. The roadway slab was displayed using orthotropic surfaces.

For generating traffic loads, the RF‑MOVE Surfaces add‑on module was presented. Following the entry of the structure and the loads, the definition of the parabolic bonded tendon diagrams, the prestressing forces as well as the position of the design locations was shown in RF‑TENDON. The design of the main beam was then performed in RF‑TENDON Design.

After the technical seminar, the get-together offered the possibility for interesting conversations and for exchanging experiences on prestressed concrete design between the seminar participants and the speakers.