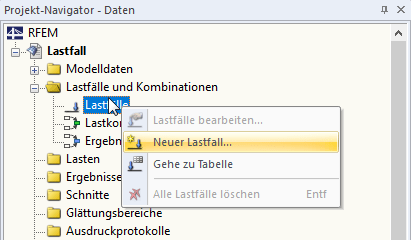 Dialog box with calculation parameters of a load case

Loads from certain actions are organized in load cases. Such load cases are, for example, seld-weight, snow, wind, or an imposed load.

When entering loads into the respective load cases, it should be ensured that the loads are entered characteristically. The partial safety factors and combination coefficients can be defined later when creating the load or result combinations.

Calculation parameters, such as the method of analysis (geometrically linear, second-order, or large deformation analysis), the solving method and additional calculation options (load increment factors, stiffness factors, and others), can be set separately for each load case.