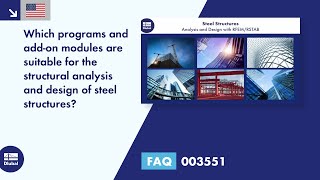 Which programs and modules are suitable for the calculation and design of steel structures?

Both RFEM and RSTAB are suitable as a solution. Numerous European and international standards as well as various add-on modules are available for both programs, which will facilitate the daily work in steel structures .

Structures, materials, and actions are defined in the basic programs RFEM or RSTAB. In addition to creating spatial frame structures, for example, halls, RFEM also provides plates, plate and shell structures, making it a more versatile option. This pays off if it is also to be designed in other disciplines, such as solid construction.

Other more specialized applications such as the plastic design, the stability analysis according to the eigenvalue method or the generation of geometric equivalent imperfections and pre-deformed equivalent models are available. Single modules such as PLATE-BUCKLING support you in the design of rigid or stiffened plates. With the SHAPE-THIN add-on module, you can create any thin-walled cross-sections. The cross-section properties are determined and stress analyzes or plastic designs can be performed.

Use the RF-JOINTS add-on modules to design hingeable or rigid connections.

The CRANWAY one-way application is available for the design of crane runways.

If earthquake calculations or vibration analyzes are necessary for the building, the RF- / DYNAM Pro add-on modules provide suitable tools for determining natural frequencies and shapes, analysis of forced vibrations, generation of equivalent loads, or for the nonlinear time history analysis.

If you have any questions about the Dlubal software, contact the sales department.