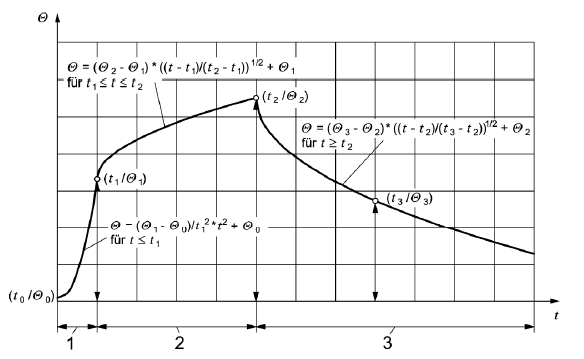 If parametric fire exposure is used as a fire scenario, the load reduction effect of the structural component must be ensured. No failure of the component should occur during the fire phase, including the cooling phase, or within the required fire resistance time.

Annex A of EN 1991‑1‑2 provides a parametric temperature-time curve. This fire scenario is no longer permitted in Germany as there is the binding National Annex to EN 1991‑1‑2 that must be applied.

This scenario was replaced by design fire, which allows for a complete description of a possible fire scenario, that is, from the development phase over the compartment fire phase to the decay phase. The curve sections are limited by distinctive points that result in the distribution of the rate of heat release. When determining temperature values, it is necessary to distinguish between ventilation controlled fires and fuel controlled fires. Moreover, the application of this natural fire model is limited. It applies to surface areas with an area of up to 400 m² and a height of up to 6 m. In the case of the ventilation controlled design fires, the characteristic value of the maximum rate of heat release can be calculated using the equations provided in Annex A.

For fuel controlled fires, the characteristic value of the maximum heat release rate may be calculated according to the following equation.

The design value of the maximum heat release rate results from:

EN 1991-1-2 indicates the formulas to determine the fire room temperature. They can be found in Annex AA.

Please note that ΔΘ (temperature gradient) must not become negative. Therefore, it is limited to a maximum of 0. The reason for this is the cooling phase, which cannot be considered with the simplified method. By means of this trick, you can also consider real fires, which allows for a more economical design of structural components.