The RF-/FOUNDATION Pro add‑on module designs single, bucket and block foundations for all support forces arising in the RFEM/RSTAB model. The design of reinforced concrete foundations is performed according to:

The geotechnical designs are performed according to the standard:

In addition to the support forces from RFEM/RSTAB, the module allows you to specify loads to be integrated into the design of a foundation. RF‑/FOUNDATION Pro provides a reinforcement concept for the upper and lower plate reinforcement, which is individually adjustable at any time. 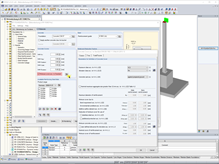 Foundation in 3D rendering in RFEM

Actions for Design of First and Second Core Width