Interoperability of Dlubal with Rhino & Grasshopper

"Good tool, half the job": This proverb also applies to the software industry. The better a program is tailored to a task, the more effectively it can be solved. The multitude and complexity of today's problems - especially in structural engineering - require specifically tailored solutions. Creating your own programs by means of textual programming requires in -depth knowledge and a high degree of abstraction. Understandably, only very few engineering firms face this hurdle. For this reason, there are additional software solutions that provide the user with a visual development environment.

Selected elements of the programming language are available in the form of graphical components. The user must subsequently place them in a logical order so that his self -created tool can solve the task. The Rhinoceros software in connection with the implemented visual programming environment Grasshopper offers exactly this functionality. Some options as well as the interaction with RFEM are presented in more detail below.

Grasshopper is mainly used to create generative algorithms. In this way, it is possible to create complex geometries much more easily than in the conventional way (manual modeling). The current state of the algorithm is displayed in the graphics window of Rhino. Any errors are thus directly visible.

By including parameters, the model can be modified as desired so that several variants can be created for later analysis in just a few steps.

However, Rhino is not just a viewer. Due to the large number of import formats, existing geometries can be imported and referenced in Grasshopper. Adjustments in the geometry are thus taken into account directly.

Interaction between Grasshopper and Dlubal

Grasshopper can be extended with a variety of plug-ins. These add -on modules range from support for modeling and analysis of the structure to the export of data to third -party software. They can thus interactively participate in the Grasshopper world. There are also plug-ins for controlling the Dlubal programs. These can either be downloaded here or are activated automatically when installing RFEM and RSTAB.

The latter refers to the Dlubal plug-in. This allows you to add structural analysis-specific information to lines and surfaces of Grasshopper and export them to RFEM and RSTAB. The plug-in in its current state of development is suitable for users who want to gain initial experience in interaction with Grasshopper-especially since it can be used without the corresponding license despite using the COM technology.

Another Grasshopper attachment was developed by Diego Apellániz in collaboration with Bollinger+Grohmann. The "Parametric FEM Toolbox" allows for a bidirectional data exchange between RFEM and Grasshopper. This allows you to export and calculate complete models including the loading to RFEM. The results can be imported into Grasshopper retrospectively.

RFEM models can also be imported partially or completely into Grasshopper. In the following graphic, a member structure from RFEM is imported into Grasshopper and subsequently rendered in Rhino.

The import can also be used for the parameterization of RFEM structures. The components have a Modify function for this. An existing RFEM model can be modified by changing the Grasshopper parameters via a downstream export component. If you also combine these possibilities with a genetic solver (Galapagos), complex optimizations can be automated. The following figure shows an excerpt from an algorithm that independently modifies the height and cross -sections of the truss with the aim of weight optimization - while maintaining the required designs.

For more information about this plug-in, take a look at the corresponding example files or the webinar recording published on YouTube.

With Grasshopper, you can create your own algorithms by placing and combining building blocks (components), which are specially tailored to the task at hand. Programming knowledge, although certainly an advantage, is not necessary. The strengths lie in the model generation, but extend into the structure optimization in connection with the design. A variety of additional plug-ins facilitate and expand the possibilities. Dlubal Software has therefore set itself the goal of extending and optimizing its own plug-in. The "Parametric FEM Toolbox" is a powerful add-on for the current program versions.

KB 001067 | Background Layers for Including Modifications 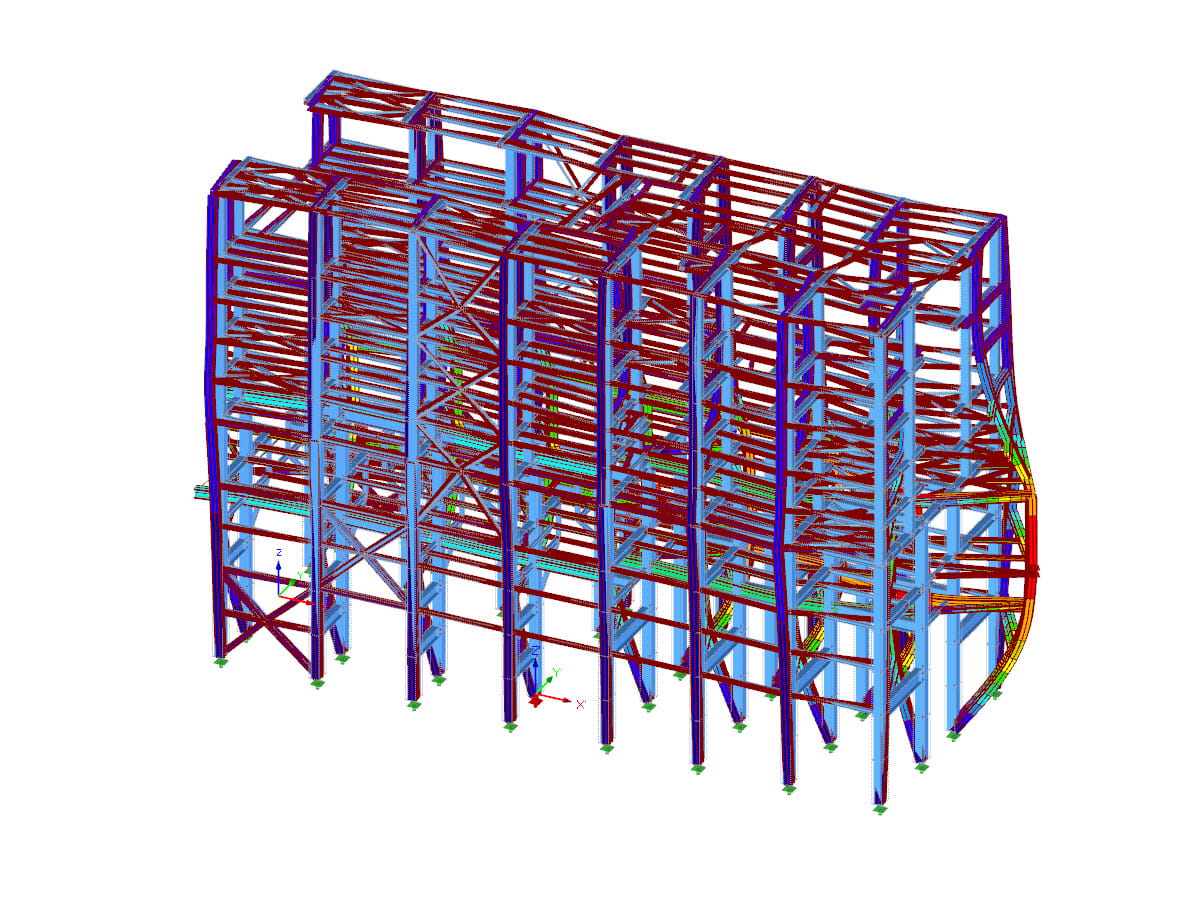 Why 3D Models in Structural Design?

Digital trends, such as Building Information Modeling (BIM) or new options for creating realistic visualized models, are based on 3D models. But do 3D models really have an advantage or are we just following a trend? The following presents some arguments for working in 3D models.

Visualization in the Rhino graphics window

Referencing a surface in Grasshopper

Components of the Dlubal plug-in

Transfer of a member structure from RFEM to Rhino via Grasshopper

Optimization of the cross -sections and the height of the truss

Comparison of solid and member