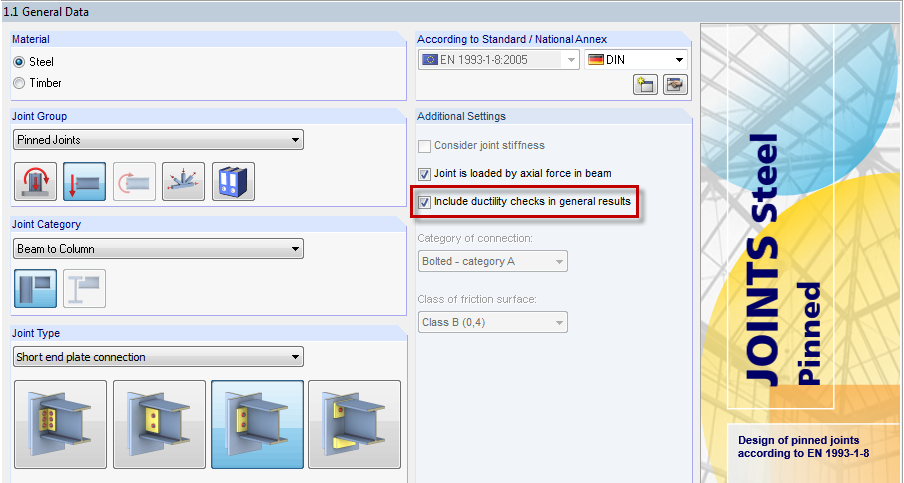 In RF-/JOINTS Steel - Pinned, there is the default option ‘Include ductility checks in general results’. What does it mean?

The rotational stiffness of many connections previously considered as “pinned” is so great according to EC 3 that they fall under the “ductile” category. It means that in theory, they can transfer smaller bending moments and should be considered as a spring in the static system.

In fact, there are no pinned‑like situations in the ultimate limit state because, for example, end plates deform plastically. In order to allow this, the following checks have to be done, among other things:

a) Ensure the sufficient rotation capacity. For example, it is necessary to ensure that the girder flange does not join the column and thus forms a larger lever arm and therefore greater stiffness.

b) Ensure sufficient ductility. It is necessary to prevent the connection from failing abruptly. “Brittle” components are bolts and welds. In contrast, for example, end plates deform plastically as already described. So there must be a certain relation between bolt and end plate stiffness. In the final analysis, you often have to select a higher bolt stiffness class than usual.

These checks are described in the Directive ‘ECCS TC10: European Recommendations for the Design of Simple Joints in Steel Structures, First Edition 2009”, though not yet in EN 1993‑1‑8.

Since the standardization is not yet fully regulated and in order to facilitate the transition, you can also deactivate the “ductility check” option.