With RF-FOUNDATION Pro, it is possible to determine settlements of single foundations and resulting spring stiffnesses of the nodal supports. These spring stiffnesses can be exported into the RFEM model and used for further analyses.

The following article describes the necessary inputs. In addition, the effects of this export on further designs (for example stability analysis of reinforced concrete columns) will be shown.

The reinforced concrete column structural system shown in Figure 01 is the example for this article.
It is a structural system consisting of four cantilever beams, which are rigidly fixed at their footings about the X- and Y-axis. The four cantilever beams are connected with each other by means of hinged beams (beams with member hinges). At the coupling points, the structural system is supported by a point-like support in the global Y-direction, because in this example, only the buckling in the global X-direction will be analyzed. The model file with the individual cross-sections is available at the end of this article for download.

The model file below this article indicates the load applied in the individual load cases.

In a first step, the internal forces of the individual load combinations are calculated (linear-elastic determination of internal forces). They are applied afterwards for the design in RF-CONCRETE Members. In the RF-CONCRETE Members add-on module, a design case is created where the reinforced concrete columns are designed. For the ultimate limit state design, the option "Nonlinear calculation (state II)" is selected here.

In the settings for the nonlinear calculation, the option "General design method for members in axial compression acc. to second order theory (EN 1992-1-1, 5.8.6)" is selected.

In this example, the columns are reinforced with a reinforcement of 4 Ø 20 on each side of the cross-section.

The resulting reinforcement proposal is used for the nonlinear design. RF-CONCRETE Members now calculates the existing safety gamma in state II and alternatively provides an effective ratio 1/gamma of the members.

Design of the Foundation Plates

Foundation plates are now designed for the rigid cantilever beams. The RF-FOUNDATION Pro add-on module is used here. The foundation plates have the following dimensions:

The determination of the bearing resistance in RF-FOUNDATION Pro is described in this technical article.

By activating the settlement calculation, the "Settlement" tab is available in Table "1.4 Loads". In addition to the generated COs for the limit states STR, GEO, and EQU, you have to define the load in Table "1.4 Loading", "Settlement" tab for which the settlements should be determined. In this case, the COs are taken from the characteristic design situation. Accordingly, the program also requires a horizontal force or a support moment to determine the foundation rotation or rotational spring stiffness. This must be considered when selecting the relevant COs for the design.

After the calculation, you can find the results of the settlement calculation in the result table "2.2 Governing Design Criteria" in addition to all other designs (equilibrium limit state, ground failure, highly eccentric loading in the core, bending design of the foundation plate, etc.). In the detail tables, it is now possible to see the spring stiffnesses for each node and each calculated load combination in z-direction as well as the spring constants C φ, x, and C φ, y.

Figure 10 shows that the spring constant C φ, x could not be determined. This is because in the example considered here, no rotation about the X-axis is calculated (2D frame structure, moments about the Y-axis only).

The now available spring constants from the settlement calculation can be exported by using the File menu in RF-FOUNDATION Pro.

Since the results have been deleted by exporting the spring stiffnesses, the calculation of the results in RF-CONCRETE Members must be restarted. The entries in the add-on module (mesh reinforcement, etc.) initially remain unchanged, as described above.

Alternatively, you can also increase the number of longitudinal bars for all columns by n = 1. This would result in the following ratio in the present example.

This present example does not describe exporting stiffnesses in state II. Find more information about it in this Knowledge Base Article.

As you can see in this example, exporting spring stiffnesses from a settlement calculation in RF-FOUNDATION Pro can have a significant influence on further designs. Thus, it is recommended to consider applying realistic stiffnesses for nodal supports instead of using a rigid support.

When using RFEM, the structural engineer has the possibility to easily check these influences and analyze them in a model file.

Note: This article was written for the analysis in RFEM 5. The option to export spring constants from FOUNDATION Pro is also available in RSTAB 8. The approach described here can be carried out in the same form in RSTAB 8. 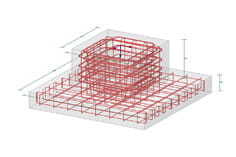 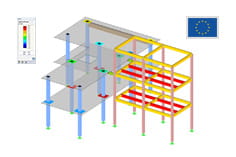 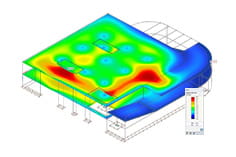