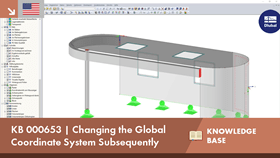 Before creating a structural model, every user is giving thoughts to the boundary parameters of the system and how to best represent the model. Special attention should be paid to the orientation of the global coordinate system. In engineering, the global Z‑axis is usually orientated downwards (in the direction of the self‑weight), while it tends to be upwards in architecture. These differences can often lead to complications during modeling, for example, when you replace global models or DXF layers.

In RFEM and RSTAB, it is therefore possible to subsequently change the orientation of the global axes. You can specify the according settings in the General Data of a model.

As a special note, however, it should be mentioned that the subsequent modification of these axes, especially with regard to the applied load (also orientation dependent), can very easily cause application errors, and therefore this function should be used only as an exception.

Mr. Lex is responsible for the development of the products for glass structures and for quality assurance of the RFEM program.
He also provides technical support for customers. 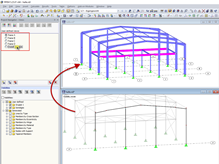 RFEM and RSTAB offer many display options in the Display navigator. They can be completely different depending on their function.

Selection in the printout report

Reduction of stiffnesses in a load combination

Result diagrams in a set of members

Defining the standard in the model general data