Home Support & Learning Learning Videos FAQ 003580 | During the plausibility check, I get an error message saying that one or more polyline segments overlap each other. How can I solve this?

FAQ 003580 | During the plausibility check, I get an error message saying that one or more polyline segments overlap each other. How can I solve this?

During the plausibility check, I get an error message saying that one or more polyline segments overlap each other. How can I solve this?

You can also use the "Explode Polyline" function to decompose the polyline (Figure 04). Thus, two lines are created between Node 5 and Node 4. Then, you can delete the line. For this, it is also possible to use the "Regenerate Model" function in the "Tools" menu.

Both procedures are shown in the video. 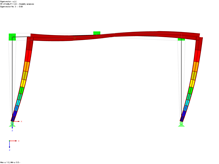 In EN 1993-1-1, the General Method was introduced as a design format for stability designs, which can be used for planar systems with any boundary conditions and variable structural height.

Load distribution on the dome with sections

Distribution of Load Along the Perimeter Walls 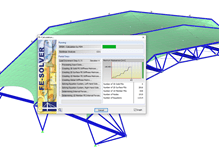