Designed to store nearly 2 million library volumes and works of art, the University of Arkansas Library Annex in Fayetteville was built with cross-laminated timber (CLT) roofs, walls and floors, and glulam beams, columns and moment frames.

According to the project team, pre-fabrication of the CLT and glulam system helped speed construction and minimized jobsite waste, resulting in a cost-competitive replacement for the traditional steel and tilt-up concrete structure initially suggested by the client. Inside, the wood is left exposed, warming the space and brightening the room to create a comfortable work environment.

Since the area is prone to tornados, the team opted to clad the larger, high-density storage volume with a stone-filled gabion basket base wall to protect against low-flying projectiles, and a heavily charred wood upper shroud that can be easily repaired or replaced while providing a fire- and insect-resistant facade. With these and other design decisions, what could have been an ordinary warehouse storage facility is instead an attractive addition to the University’s campus.

Hall made of wood 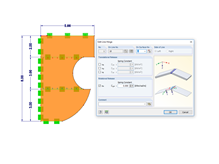 One of the advantages of entering the structure in RFEM is the complete freedom when selecting the geometry.

Design of a curved chair

Deformation in the characteristic/quasi-permanent situation 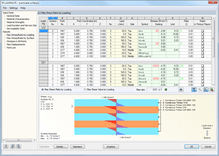