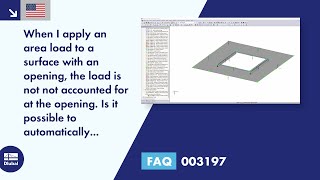 If openings are available in surfaces, the surfaces in the opening zones are, as is well known, not to be stressed. Is it still possible to generate a surface load on an opening anyway?

Thus, it is possible to set the loads e.g. for non-load bearing elements such as windows or the like.