What is the difference between network and single-user licenses?

In the case of a single user license , the user works with the programs licensed to his workstation. Use of the licenses is controlled by a key (USB hardlock, also known as dongle or softlock). The key is installed directly on the computer of the respective workstation. Instead of the USB hardlock, software (softlock) can also assume the protective function. The corresponding authorization file (author.ini) is used to control which programs can be operated with the respective key.

The advantage of such a single-user license is that the user always has exactly the same configuration of the programs available in the form of a key. No one else can use or block the programs at the same time. Using the programs can be easily transferred from one computer to another, for example, by a USB hardlock. The prerequisite is that the programs have been installed once on the computer with the corresponding authorization.
The same thing works with the softlock. Here, the relocation procedure is only a bit more complex and can be carried out by means of software. Single-user licenses are particularly advantageous for smaller offices with fewer users who always work with the same software configuration.
For a network license, the license protection is activated by means of a special network key. It is also available as USB hardlock or softlock. The network key can be attached or installed on any computer that can be reached in the network. A special license manager then controls the access to it. The Dlubal software itself is installed as is the case with the single-user license. The authorization file then specifies that the protection key is searched for in the network.
The advantage of the network license is that it is no longer necessary to change/move the key from one workstation to an other. Once the software has been installed, it can also be used as long as one license is free and not already used by another user. Another significant advantage is that the respective features of program modules can be better adapted to the requirements. Less frequently used add-on modules can be purchased in smaller numbers than number of employees who have to be able to work with them. The likelihood is low that another employee will use the license at the same time. Thus, add-on modules can also be shared with each other. Due to the option to use softlocks, it is also possible to use them on virtual machines. If network licenses are used, you can also access the Dlubal programs remotely, for example by using Remote Desktop. Since not everyone has a physical access to the server, the license is also better protected against theft, for example, and you do not have to search for it with other employees.
Network licenses are now the standard for larger companies with several employees.

Single-User License
Employee A works in reinforced concrete area:
RFEM, RF-CONCRETE, EC2 for RFEM, RF-PUNCH Pro, RF-CONCRETE Columns
Employee B works in the steel construction sector:
RF-STEEL EC3, RF-STABILITY, RF-DYNAM - Natural Vibrations
Employees A also need access to the RF-DYNAM Basis, so they have to get the key from employee B. However, he can not process any reinforced concrete structures.
Compare network license with the same equipment
Two licenses RFEM, RF-CONCRETE, EC2 for RFEM, RF-PUNCH Pro, RF-CONCRETE Columns, RF-STEEL EC3, RF-STABILITY, RF-DYNAM Natural Vibrations
Each employee can use the full range of add-on modules as long as the other employee is not working with them at the same time. The license is only used if the add-on module is open (in use). For example, it would also be possible to edit a structural system with mixed steel and concrete materials.
Due to the increased usability and flexibility of the add-on modules, network licenses are associated with an additional charge of approx. 25% of the initial license price (all prices are listed in the webshop). In RFEM, RSTAB, and SHAPE-THIN, you can create user-defined print templates ("Printout Report Template") and printout headers ("Report Headers"). These templates can also be transferred to other computers and used there. 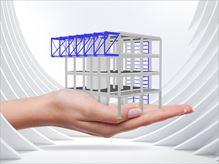