For a project in Rotterdam, ADS Ertner used IDEA CONNECTION to analyze a structural steel connection. This program calculates steel connections utilizing the CBFEM method where each thin-walled cross-section is modeled with nonlinear material properties, nonlinear bolts, and nonlinear welds. In order to transfer loads, ADS Ertner needed to use blocks in the connection model. In IDEA CONNECTION, blocks are not easily integrated with thin-walled plates.

Modeling and Stress Analysis in RFEM

ADS Ertner reached out to MSc Engineering who created an RFEM 3D calculation model with finite solid elements for the verification of the steel connection. This special connection includes a node with six connecting members. The upper column and the lower diagonals experience extremely high axial forces which originate from the building’s precast concrete structure and further cause a high tensile force in the lateral horizontal beam. The RFEM 3D calculation model was created to design the internal stresses in the thick-walled steel block with a maximum depth of 17.72 in. In the calculation model, all elements (beams/blocks) were modeled as solid elements. The nodal loads were applied to the solids at rigid boundary surfaces at the ends of the solids. These rigid surfaces distribute the loads uniformly over the solids’ faces. Some beams are supported by semi-rigid boundary surfaces.

In the model, the block acts as a transmission element for the large axial forces. From an economic standpoint, a thick-walled steel block was a better solution than a series of welded reinforcing plates. The RFEM stress analysis results were compared to a maximum allowable steel stress of 46 psi which corresponds to a steel grade S355 with a plate thickness of up to 3.94 in. The block stresses were considerably lower than the allowable stresses.

The horizontal lateral beam and the column are connected by end plates and bolts. The end plates are modeled with solids with additional contact solids to fill the void between the end plates and the block end plates. Openings were used to represent bolt holes. The bolts are rigid elements transmitting tensile and shear forces.

RFEM was ultimately utilized for the design as solids can easily be calculated within the program. The team along with Prof. Wald from the University of Prague utilized RFEM to verify the behavior of thin-walled plates in IDEA CONNECTION. 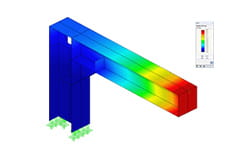