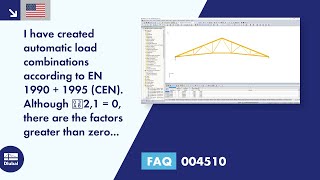 I have created automatic load combinations according to EN 1990 + 1995 (CEN). Although Ψ2,1 = 0, there are the factors greater than zero applied for wind and snow. Is this a program error?

In the case of the combinations according to the general Eurocode without considering a national annex, the design situation in the serviceability limit state - quasi-permanent must be considered as in Figure 01. Here, it becomes clear that due to the last term, the variable loads are considered as unequal to 0 due to Ψ0,i, even in the case of Ψ2,1 = 0.