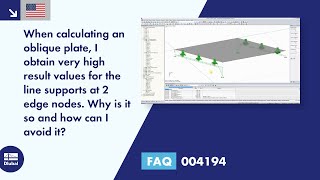 When calculating an oblique plate, I obtain very high result values for the line supports at 2 edge nodes. Why is it so and how can I avoid it?

The default definition of surface elements assumes the isotropic material behavior. The load attempts to get to the supports as quickly as possible. The stiffness of the elements also plays a role here.
In the case of plates, the best way to display and represent the structural behavior or the load transfer is to use the trajectories of the principal moments αb. For wall elements, it is necessary to consider the trajectories of the principal axial forces αm.
In this example, the load is not transferred parallelly to the free edges of the plate, but almost perpendicularly to the supports as this is the shortest path of the load transfer.
At the dulled corners of the structure, the load application area is larger than in the support centers, corresponds to a singularity point, and as a consequence of that, it has great peak values.
In order to force the system to remove the load parallel to free plate edges, the following procedure is the fastest:
Definition of an orthotropic plate. It is recommended to use the "Effective Thicknesses" orthotropy type. The effective plate thickness has to be specified in the support direction and a very small thickness in the secondary support direction (for example, 1 mm).
The second figure shows the difference between both models.