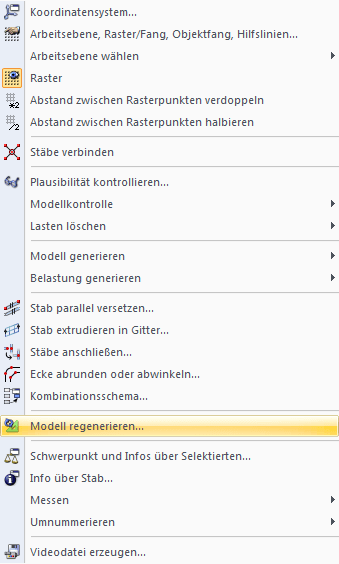 After the import of a DXF file I have now several nodes with identical coordinates. Which options offers RSTAB to clean the system?

The problem occurring when importing DXF drawings cannot be avoided.

However, you can use the plausibility check or other functions available for the elimination of double coordinates. Here are some of them:

With this function (Tools -> Connect Members) you draw a window over the relevant area in RSTAB. If there are members intersecting with nodes, they will be automatically divided.

With this tool (Tools -> Join Members) you can define an area around a node/member and join the nodes lying in a particular radius to this node/member, either eccentrically or by shifting.

allows for selecting double nodes. Among the settings you can specify for example that all nodes are merged in the same node and that also all related properties have an effect on this node (supports, eccentric connections, etc.).

Nodes with many decimal places resulting from the import can be rounded down.