Home Support & Learning Learning Videos KB 000655 | Longitudinal reinforcement to be applied for the shear force design according to EN 1... 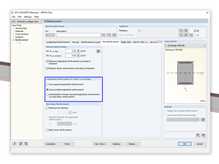 Two-span beam made of reinforced concrete