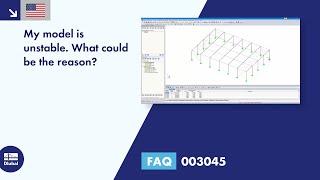 My model is unstable. What could be the reason?

There can be various reasons for the calculation abort due to an unstable structural system. On the one hand, it can indicate a "real" instability due to overloading the structural system, but on the other hand, the modeling inaccuracies may also be responsible for this error message. In the following, you find possible procedures to find the instability cause.

First, you should check if the modeling of the structural system is all right. It is recommended to use the model check tools provided by RFEM/RSTAB [Tools → Model Check]. For example, these options allow you to find identical nodes and overlapping members, so you can delete them, if necessary.
Figure 01 - Options of Model Check
Furthermore, the structure subjected to pure dead load can be calculated in one load case according to the geometrically linear analysis, for example. If results are displayed subsequently, the structure regarding the modeling is stable. If this is not the case, the most common causes are listed below (see also the video "Model Check" under "Downloads"):

If the stiffening is missing, it may also lead to the calculation aborts due to instabilities. Therefore, you should always check whether the structure is stiffened sufficiently in all directions.
Figure 07 - Missing Stiffening