Options for considering accidental torsional effects according to standards

In order to consider inaccuracies regarding the position of masses in a response spectrum analysis, the standards for seismic design specify rules that have to be applied in both the simplified and the multimodal response spectrum analysis. These rules describe the following general procedure: The story mass must be shifted by a certain eccentricity, which results in a torsional moment.

This article describes two ways how to determine the accidental torsional actions in RFEM and RSTAB.

It is possible to determine the accidental torsion automatically in the add-on module RF-/DYNAM Pro - Equivalent Loads. This option can be activated under "Dynamic Load Cases" in the "Equivalent Force Analysis" tab. When using this option, only the value of the eccentricity is required in the add-on module. In EN 1998-1 and ASCE 7, for example, this value is 5% of the building length or width in the direction perpendicular to it:
ex = 0.05 ⋅ Ly
ey = 0.05 ⋅ Lx

Based on this eccentricity which is multiplied by the equivalent load, the add-on module determines a torsional moment that is applied to each FE node or internal node (for each individual load case). The formula is:
M = |Fx ⋅ ey| + |Fy ⋅ ex|

Due to applying a torsional moment locally in each FE node, a high torsional stress may occur in the individual structural components. To avoid it, the torsional action must be applied manually. It is described in the following.

A more economical way to consider the accidental torsional actions is to apply a global torsional moment. This results from the total seismic loads per story and must be distributed to the individual shear walls of a building. This procedure usually leads to more economical results and complies with standards.

As an example, this method is described for a building that is regular in its layout and has an L-shaped ground plan. A response spectrum analysis is performed in the add-on module RF-/DYNAM Pro - Equivalent Loads. Two result combinations are the result, one for the X-direction and another for the Y-direction of the building. The evaluation is done by means of a result beam, evaluating the shear forces (Vy and Vz) per story (Vz corresponds to the seismic force in X-direction → Fx and Vy correspond to the seismic force in Y-direction → F y). This seismic load per story is then multiplied by the eccentricity (5% of the vertical building length) and both directions are added, resulting in a torsional moment per story. The results are listed below.

For distributing the torsional moment correctly on the individual shear walls, the cross-section program SHAPE-THIN can be used as the calculation of non-connected cross-sections according to the theory of stiffening systems is possible. Accordingly, the ground plan (all shear walls, columns are irrelevant in the stiffening) is modeled and loaded by a unit torsional moment of 100 kNm. The result is a resulting shear force per wall.

Since these shear forces were calculated for a unit moment of 100 kNm, they have to be determined for the actually occurring moments per story. The values can be multiplied by the moment shown in the table and divided by 100. These forces per wall have to be applied in the building model as line loads (divided by the wall length).

Thus, two new load cases are the result: Torsion in X-direction and torsion in Y-direction. Subsequently, these load cases can be superimposed in a new result combination with the OR condition and combined with the seismic loads. Then, we get the final results: the resulting seismic loads including a correct application of the accidental torsion.

A detailed description of this method as well as tips and tricks for entering data can be found in the linked webinar (only available in German).

Ms. Effler is responsible for the development of products for dynamic analysis and provides technical support for our customers. 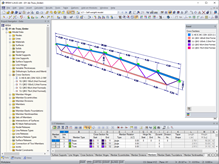 This technical article deals with the design of structural components and cross-sections of a welded truss girder in the ultimate limit state. Furthermore, the deformation analysis in the serviceability limit state is described.

Load distribution on the dome with sections

Distribution of Load Along the Perimeter Walls

External Pressure Coefficients, Cp, for Domed Roofs with a Circular Base (according to Figure 27.3-2 [1])

Full view of Kauffman Center for the Performing Arts (©www.novumstructures.com)