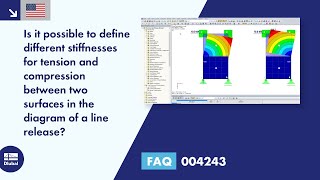 Is it possible to define different stiffnesses for tension and compression between two surfaces in the diagram of a line release?