As the geothermal energy market is continuously increasing, BAUER Maschinen GmbH, a German company working in the field of specialist foundation engineering, has developed a new deep drilling rig. The German Dlubal Software customer Ing.-Büro H.-U. Möller was in charge of the plant's structural analysis. The system is used to make borings reaching to a depth of 7,000 m in the area of geothermal energy, oil or gas.

In addition, it is possible to extend existing boreholes using modern boring technology. The boring device is built in Germany and distributed worldwide.

The deep drilling rig has the following dimensions: L x W x H = 25 m x 12 m x 42 m. The mass of the entire structure is 580 t. It has a modular structure which enables transport on a truck.

The plant is self-erecting in parts and can be shifted from one bore hole to the other when built up. The drill bit is driven into the earth by a maximum rotary drive of 60°kNm and pulled out by a maximum force of 4,400 kN.

The model consists of 1,137 nodes and 2,052 members forming a lattice tower with the shape of a U. The guide is applied on the open U‑side.

For their calculation engineers have analyzed six RSTAB models with different loads and states such as plant in and out of operation with concentrated support and tension failure, lying tower, lifting of tower, mounting of winch etc.

The structural system and loading were entered in a basic system. Then, all systems to be analyzed were derived from the base system. To determine the maximum internal forces and stresses, the six models were superimposed in a super combination. 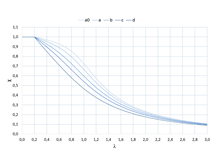 Internal Forces of Member No. 2: Axial Force Without Moment My