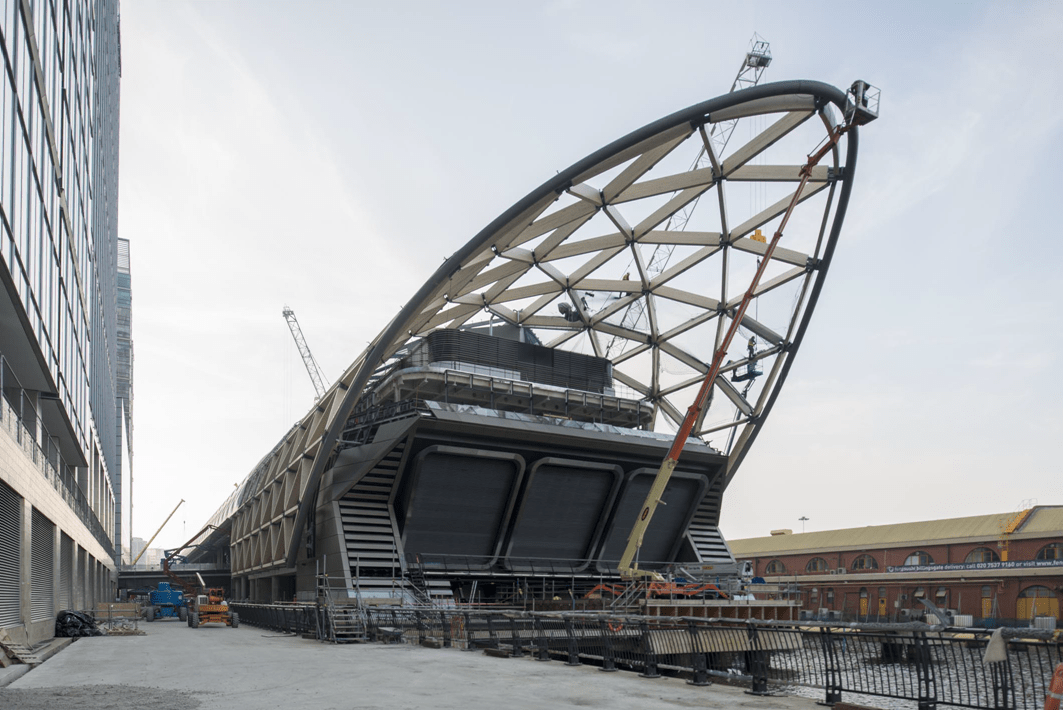 A unique wooden structure is located in the heart of London since the end of March 2014. In a period of just six months, the Austrian company WIEHAG built the roof with a total length of 300 m for the Crossrail railway station situated in the business district Canary Wharf.

Crossrail is a railway and infrastructure construction project in Greater London which is to be completed by 2018. The cost for the entire project with its route network, which is about 100 km long, is estimated at approximately 18 billion euros.

WIEHAG was not only responsible for the construction work but also for the planning and structural analysis of the timber grid roof. The structural calculation of the beam structure including altogether 1,414 beams consisting of glued laminated timber as well as 111 steel pipes was performed in RSTAB.

In its cross‑section, the roof structure of the station building can be described as a semi‑ellipse. The arc spans freely over a width of about 31 m. Coupled triangles form the mesh structure of the load‑bearing shell. With a regular grid of 6 m, the timber structure is supported at the nodal points.

At both ends of the longitudinal sides, the roof cantilevers spectacularly 30 m over the water surface. There, round steel pipes running parallel to the diagonal timber beams form the end of the roof. These so-called end ring beams are double curved and have an architectural function in addition to strengthening the structure.

A major engineering challenge was the design of the nodal points consisting of steel. They were represented and calculated as finite element models in RFEM. The structural steel parts had to be made with a high degree of accuracy in order to keep the tolerance compensation as low as possible at the construction site.

The roof covering consists of membrane cushions. In the central area, however, the roof is open to facilitate the natural watering of a park created inside.

The Crossrail station in Canary Wharf is one of the largest timber construction projects in Great Britain, representing another architectural highlight for the city of London.