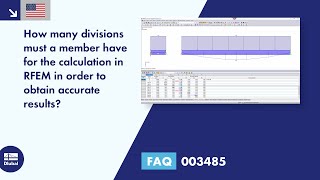 How many divisions must a member have for the calculation in RFEM in order to obtain accurate results?

It is not possible to give a general answer to this question as it depends on the structural system. There are several divisions to be considered in RFEM.

The member divisions for result values can be created via "Insert" → "Model Data" → "Member Divisions." This division ensures that the internal forces of members can also be displayed at intermediate points in the RFEM results tables, for example. The graphical result display remains unchanged.

The divisions for the graphical result diagram and the determination of the extreme value can be displayed and controlled in the FE mesh settings (see Figure 01).
For cable, foundation, and tapered members or members with plastic properties, you can specify the number of internal divisions. They lead to a real division of the member by intermediate nodes. However, if a member is arranged on the boundary line of a surface or if the definition line has an FE mesh refinement, the specification has no effect.
The option to activate member divisions for large deformation or post-critical analysis allows you to also divide also beams for the calculation according to the large deformation analysis by intermediate nodes, so that these members are calculated with higher accuracy. The number of member divisions is taken from the text box above.
If using the division even for straight members, which are not integrated into surfaces, FE nodes are generated on all free members and considered for calculations according to the linear static and the second-order analysis. The FE length is either determined by the global target length lFE in the General section of the dialog box, or entered manually.
The option to use division for members with nodes lying on them creates FE nodes on those locations of the member where the end nodes of other members are lying, without having any connection between these members.