The 204 m2 home is one of only two residences in the country made of cross-laminated timber (CLT), a durable wood material produced by gluing together layers of lumber that alternate in direction.

The stimulation of Haus Gables had Bonner asking: "What if you blurred the lines between real architecture and the media and methods used to simulate it, namely drawings and models?" The project required the work of four engineers including specialists in CLT. The heaviest panels weigh 1588 kg, yet all of them were craned into place in just 14 days. The remaining construction took about a year.

This single-family home adjacent to the Atlanta Beltline, a former railway corridor around the core of Atlanta, is a two-storey, two-bedroom house assembled from 87 cross-laminated timber (CLT) panels bolted together with 30 cm screws. These massive custom-milled panels, up to 24 cm thick and 10 m long, provide both structure and interior surfacing.

A cluster of six gable roofs are combined to form a single roof. In an attempt to rework spatial paradigms of the past, such as Le Corbusier’s free plan and Adolf Loos’s raumplan, Bonner offers the roof plan as a way to organize architecture. Here, the roof plan establishes rooms, catwalks, and double height spaces in the interior by aligning these spaces to ridges and valleys in the roof above. In this case, the floorplan is a result of the roof.

Both engineering firms worked together to gather information from the structural model for the foundation engineer to design the podium as well as for Bensonwood to detail the screw and other timber connections. Special consideration was needed to orient the screws and bearing surfaces with respect to the anisotropic properties of the timber.

Using the RF-LAMINATE module within RFEM, CLT capacities and stiffnesses were verified which was critical to the success of the project. This held especially true when the CLT manufacturer (species and layup) changed midway through the design process. 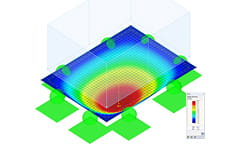 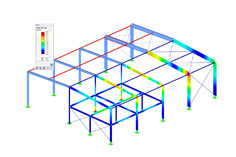