BIM (Building Information Modeling) is the up-to-date solution for the planning and realization of buildings, which is based on a network of all participants in the building process.

All relevant building data is included in a 3D model. Individual branch-specific models, for example for structural analysis, are derived from the digital building model. They can be integrated in RFEM or RSTAB by means of different methods and used for the structural analysis. In the ideal case, the building model is used to export and calculate the analytical model for RFEM and RSTAB.

“As usual, I would like to confirm that it is a real pleasure to work with the Dlubal Software programs, which I have been able to use with ease.

I am also completely satisfied with the connection to REVIT 2017 as it complies with a very high standard and works well.”

“The data exchange between cadwork and RSTAB has gone without a hitch.”

Piping Design per ASME in RFEM

KB 001067 | Background Layers for Including Modifications 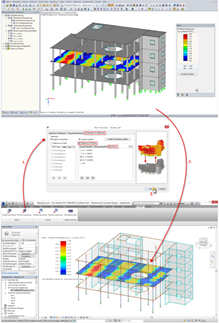 Opportunities and Challenges of Structural Engineers When Using BIM

The bachelor thesis of Daniel Dlubal focuses on presenting and highlighting the chances, advantages and opportunities of BIM when performing structural analysis and design of buildings.
Interfaces and Relevant Features for BIM-Oriented Planning BIM Workflow: Data Exchange Using IFC Files Building Information Modeling and Structural Analysis Software: Scenarios and Success Factors for Data Exchange The Effect of Interoperability Between BIM and FEM Tools on Structural Modeling and Analysis

Visualized deformations of an office building

Representation of internal forces for members and surfaces

Transfer of Analytical Model from Tekla Structures to RFEM

Background Layers for Including Modifications

Definition of Member Rotation in RSTAB and RFEM

Definition of rod rotation in RSTAB and RFEM

Detailed Settings for Import of DSTV

Design of Logs in RFEM 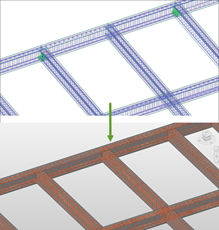 The reinforcement proposal from RF-/CONCRETE Members can be exported to Revit. The rectangular and circular cross-sections are currently supported.

The reinforcement bars can be modified retroactively in Revit.

Design of steel members according to the Canadian standard CSA S16

Design of aluminum members according to Eurocode 9

Design of aluminium members according to the American standards ADM 2010, ADM 2015 and ADM 2020

Generation of equipment for lattice towers of mobile operators

Generation of wind, ice and variable loads for lattice towers

Design of triangular and quadrilateral lattice towers according to European standards