A spectacular viewing platform visible from afar is the architectural highlight of the Meixi International New City, a city expansion of Changsa, China. The conical-shaped double helix with a height of 30 m provides a 360-degree view including the artificial Meixi lake which covers a 4,305,564 ft² area.

KSP Jürgen Engel Architekten together with the Weiske + Partner structural engineers developed different ideas for the project in 2013. The decision was made in favor of the helix in its present form. The engineers from Weiske + Partner used the FEA software RFEM for the structural analysis of the spatial structure.

A pedestrian accessible 6-meter wide ramp spirals upward around the exterior of the inclined columns. At the lookout height of 99 ft, the helix has a total diameter of 289 ft. A reverse ramp on the interior of the columns leads pedestrians back down to the base of the structure. The structure has a total length of one kilometre and eventually ends in a public park.

The ramps consist of bending and torsion-resistant steel pipes which are supported at the face of the 32 steel columns. Because the ramp is supported on both the interior and exterior of the columns, the eccentric loads are largely compensated. Therefore, the columns were designed as relatively slender and economical hollow box sections. The tapered columns consist of a wider base diameter and are fixed at the footing to a circular foundation on large bored piles.

The lateral support of the helix structure includes filigree tension cables spanning between the columns. The cables' flat inclination reduces the horizontal stiffness of the structure resulting in smaller seismic load reaction forces. 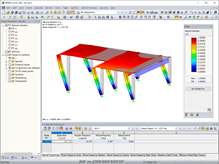 In RFEM, it is possible to modify stiffnesses for materials, cross -sections, members, load cases, and load combinations in many places.

Internal Forces of Member No. 2: Axial Force Without Moment My