The building's sculptural shape forms an "E", one of four letters in the word HOME. Turning the term into reality through a total of four different high-rise buildings is one of the creative guidelines for the FRANKLIN conversion project in Mannheim, Germany.

The ground and the upper first floor include maisonettes with significantly larger floor plans than those on upper floors. As a result, in addition to architectural reasons, the building has an inward offset and the base area decreases to 20 m x 48 m beginning with the second floor. From the second floor up, the building's floor plan is modified every second or third floor due to those offsets. This leads to multi-story overhangs on both sides of the building. Within the first basement floor, there are cellar rooms for rent in addition to underground parking spaces, the second basement floor is used exclusively for underground parking.

A majority of the gravity load, including the loads from the floor cantilevers, is supported by six shear walls arranged in the transverse axes. The upper second floor’s longitudinal exterior walls include a unique structural feature. Because these outer walls lie outside the load-bearing axes, they are decoupled for loading purposes.

Due to the two-story underground parking in the basement floors, a large-scale grid is given for the load-bearing structural components. Arrangement options for columns and walls making up the structural support system are restricted by wide passages and necessary turning radii. However, the principal support system in the above-ground floors is largely congruent with the basement floor grid.

The required seismic design for the building, located in seismic zone 1, was carried out entirely in the RF-/DYNAM Pro add-on modules. The graphical output was advantage concerning the structure's natural vibrations, internal forces, and moments. Furthermore, the seismic design results were integrated into the main program RFEM where an integral design and verification was possible for all design combinations.

In addition to the structural challenges described above, the design's main focus was on thermal, noise, and fire protection requirements. Because of the cantilevered floor plans, a large number of loggias, balconies, and roof terraces were constructed. With these structural components, a close coordination between all involved parties for static, structural-physical, and fire protection requirements was needed for an optimal design. The 3D model was particularly useful for the thermal insulation design considering the balconies and loggias. 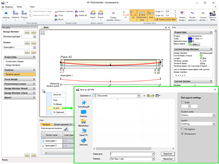 Once you have determined the final tendon geometry in RF‑TENDON, exporting the model to a CAD program can be useful. For this purpose, the module includes the option to export the file in the .dxf file format.

Stage of the hall in Calais (© Julien Lanoo)

Modeling of the roof (© Bollinger+Grohmann)

Identical loads for all foundations

Reduction of the minimum reinforcement for slowly hardening concrete

Non -consideration of support forces in the single foundation design

Automatic determination of the minimum concrete cover according to the standard