If crane runway girders are designed with flat steel rails, the welding of these rails is always a detail for the design. As a rail fixing, you can generally select between continuous and intermittent fillet weld. The following article provides an overview of the design processes and their specific features, especially when using the EN 1993‑6.

There are two variants of intermittent fillet welded connections. These are shown in the following figure from [2].

Weld sections can be arranged either on opposite sides or staggered. The staggered arrangement is disadvantageous for the design since only one weld can be used for the transfer of horizontal loads. The third option that is not shown in the figure above, is a continuous fillet weld along the entire rail length, of course.

Rail weld stresses are calculated according to Directional Method specified in [2]. In this case, the stresses refer to the bisecting surface of the fillet weld. According to [2], (NA) Section 4.5.2, the minimum structural thicknesses must be kept for the weld. The standard requires a weld the minimum thickness of at least 3 mm or the application of the following formula:

The eccentric wheel load of 1/4 of the rail head width is not taken into account at the ultimate limit state according to [3]. Therefore, the design due to wheel loading is always performed.

For intermittent rail fillet welds, it is necessary to check whether the weld length lw is smaller than the calculated loaded length leff. Generally, the minimum of both values is governing for the design.

Image 07 - ULS Stresses of Intermittent Rail Weld on Opposite Sides

Since the horizontal load is only applied to a weld section in the case of the staggered arrangement of welds, Divisor 2 is omitted in terms of HEd.

Webinar: Design of Craneway Girders According to Eurocode 3

Modeling of Factor Pulleys in RFEM

Crane with Cable on Pulleys

When using interrupted welds between rail and flange, make sure that the applied weld length does not exceed the length of the rigid load application of the wheel load according to Equation 6.1 in [1].

ULS Stresses of Intermittent Rail Weld on Opposite Sides

Influence Parameters for the Calculation of the Effective Length According to [2], Tab. 6.2

Design of Suspension Cranes with CRANEWAY 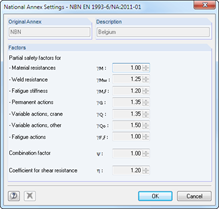 For the design according to Eurocode 3 the following National Annexes are available:

In addition to the National Annexes (NA) listed above, you can also define a specific NA, applying user-defined limit values and parameters.