The article Lateral-Torsional Buckling in Timber Construction | Theory explains the theoretical background for the analytical determination of the critical bending moment Mcrit or the critical bending stress σcrit for the lateral buckling of a bending beam. The following article uses examples to verify the analytical solution with the result from the eigenvalue analysis.

For the single-span beam with lateral and torsional restraint without intermediate supports (see Figure 01), the equivalent member length results in the case of a load application at the top to:

The factors a1 and a2 can be seen in Figure 02 according to the moment distribution.

The critical bending moment can then be calculated as follows:

In this example, we do not increase the product of the 5% quantiles of the stiffness values due to the homogenization of beams made of glued laminated timber.

For more complex systems, it may be advantageous to determine the critical loads, moments, or stresses using the eigenvalue solver. Use the RF-/FE-LTB add-on module, which is based on the finite element method,to calculate the stability loads of sets of members. An elastic material behavior is assumed for a geometric nonlinear behavior. The critical load factor is important for timber construction. This indicates the factor by which the load can be multiplied before the system becomes unstable.

For this example, the beam is loaded with a unit load of 1 kN/m. The bending moment results for this to:

Since the lower quantile value of the critical moment is to be determined, the 5% quantiles must be used for the stiffness values E and G. To do this, you have to create a user-defined material that is only used in the add-on module. For this material, the stiffness parameters E and G have to be replaced.

Then, define the lateral and torsional restraints. It is important to ensure that the degree of freedom φZ needs also to be solved.

You have to set the load eccentrically so that it acts on top of the beam.

The calculation results in a critical load factor of 9.3333 (see Figure 08). If the load is multiplied by this factor, the upper flange will deflect and the system becomes unstable.

The following applies for the critical moment:

This corresponds very well with the result of the analytical solution.

Single-Span Beam With Lateral and Torsional Restraint and Intermediate Support

The beam is now supported rigidly fixed laterally in the third points by a stiffening structure.

and the critical moment in

The eigenvalue solver results in a critical load factor of 26.1735, taking into account the intermediate supports at the shear center (see Figure 10).

The following applies for the critical moment:

If the intermediate support acts on the upper side (see Figure 11), the critical load factor becomes larger (32.5325) because this position has a more favorable effect on the lateral buckling behavior of the beam.

The analytical approximation is also relatively good for this case.

For most cases, it is probably sufficient to determine the critical bending moment Mcrit or the critical bending stress σcrit using the analytical equations from the literature. For special cases, two options were shown how this can be implemented using Dlubal programs. While the RF-/FE-LTB add-on module is used to perform the calculation using members, the RF-STABILITY add-on module allows you to perform even more complex stability designs. An example is a lateral and torsional restraint that is not arranged over the entire beam height. This can be easily analyzed with a surface model. 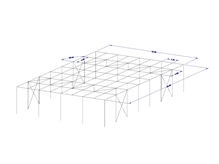