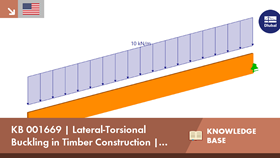 For the system shown in Image 01, the truss members should be analyzed for lateral buckling. In the roof plane, there are six truss members available as parallel beams with a length of 18 m and two stiffening bracings. The beams on the gable sides are supported by columns and are not considered for the calculation. A design load qd of 10 kN/m acts on the truss members.

Please note: Even if the following equations for E and G do not explicitly refer to the 5%-quantiles in the index, they have been taken into account accordingly.

Single-Span Beam With Lateral and Torsional Restraint without Intermediate Supports

For the sake of completeness, the truss member is analyzed first without lateral supports (see Image 02). The equivalent member length results from a load application on the upper side of the truss with a1 = 1.13 and a2 = 1.44 as follows:

The critical bending moment can then be calculated as follows:

These examples do without an increase of the product of the 5%-quantiles of the stiffness properties due to the homogenization of beams made of glued laminated timber.

The bending moment acting on the trusses results as follows:

The eigenvalue analysis with the RF-/FE-LTB add-on module provides a critical buckling load factor of 0.3334 as a result. This results in the critical bending moment

and is thus identical to the result of the analytical solution.

As was to be expected for this unsupported, slender truss member, the acting bending moment is greater (by a factor of 3) than the critical bending moment, and the truss is thus not sufficiently restrained against lateral buckling. However, a bracing should counteract, which is now considered for the calculation.

If the stiffening bracing is stiff enough, the spacing between the lateral supports (for example by purlins) is often used as an equivalent member length for the lateral buckling analysis. This procedure was already described in the previous article Lateral-Torsional Buckling in Timber Construction | Examples 1. Thus, 2.25 m is used as L. For a1 = 1.00 and a2 = 0.00 follows:

For the critical bending moment the following results:

The eigenvalue analysis with the RF-/FE-LTB add-on module provides a critical buckling load factor of 2.7815 as a result. This results in the critical bending moment

As described in Lateral-Torsional Buckling in Timber Construction: Theory, [1] extends the determination of the equivalent member length for members on elastic foundation by the factor α and β. Thus, it is possible to consider the shear stiffness of a stiffening bracing for the lateral buckling of the truss members. The bracing's shear stiffness can be determined, for example, according to [2] Figure 6.34. As can be seen from the above, it depends on the type of bracing, the strain stiffness of diagonals and posts, the diagonals' inclination, and the ductility of fasteners. For the stiffening bracing shown in Image 01, the shear stiffness results in:

The ideal area is accordingly

and thus the shear stiffness of a bracing with a diagonals-to-chord angle of 60.64 ° is

The member foundation per bracing can be converted according to [2] Formula 7.291 as follows:

For two bracings and six truss members, the following spring constant is available per truss:

Thus, the critical bending moment results in an unrealistic value of:

A value similar to the system with rigid intermediate supports would be expected. As described in Lateral-Torsional Buckling in Timber Construction: Theory, the application of the extended formula with α and β is limited in its application. Strictly speaking, it is only valid if there is a deflection in a large sinusoidal arc. In other words, if the foundation is very soft. This is no longer given in this example. Multi-wave eigenfunctions, leading to a small critical buckling load for any larger spring constant, are not included in the aforesaid equation, since it is based on monomial sinus approaches.

As you can see in Image 07, a multi-wave eigenvector results from the eigenvalue analysis.

In this case, the method derived by Prof. Dr. Heinrich Kreuzinger (2020) can be applied. The critical bending moment is calculated as follows:

The eigenvalue solution from the RF-/FE-LTB add-on module (see Image 07) results in:

Both results match very well. However, the analytical solution is on the safe side, as this method is based on a constant bending moment distribution. Then, a critical load qcrit is assigned to the constant critical bending moment Mcrit.

Since the member foundation in this example is regarded as very stiff and constantly distributed over the truss member length, critical bending moments occur that are slightly higher than for the rigid single supports.

According to [3] Chapter 9.2.5.3 (2), stiffening bracings must be enough stiff to not exceed the horizontal deflection of L/500. The calculation must be carried out with the design values of the stiffnesses (see [1] Chapter NCI to 9.2.5.3).

The allowable deformation is:

The result confirms the assumption of a very stiff bracing and is consistent with the almost identical critical bending moments of the system with rigid intermediate supports and the one with elastic member foundation.

It was shown, which possibilities in timber construction can be used to analyze lateral buckling of bending beams. For common methods it is important to ensure that stiffening bracings are stiff enough to accept rigid supports. Options have been shown in this article for the case that this assumption does not apply. Basically, the bending beams and the stiffening bracings have to be designed for their load-bearing capacity and serviceability according to the corresponding standard. However, this is beyond the scope of this article. 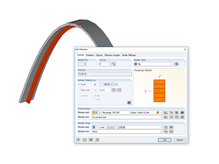 This time, we want to look at modeling downstand beams by means of ribs.

Single-Span Beam With Lateral and Torsional Restraint without Intermediate Supports

Horizontal deflection of the bracing 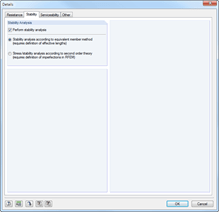 The cross-section resistance design analyzes tension and compression along the grain, bending, bending and tension/compression as well as the strength in shear due to shear force.

The design of structural components at risk of buckling or lateral-torsional buckling is performed according to the Equivalent Member Method and considers the systematic axial compression, bending with and without compressive force as well as bending and tension. Deflection of inner spans and cantilevers is compared to the maximal allowable deflection.

Design-relevant parameters such as the stability analysis type, member slendernesses, and limit deflections can be freely adjusted.