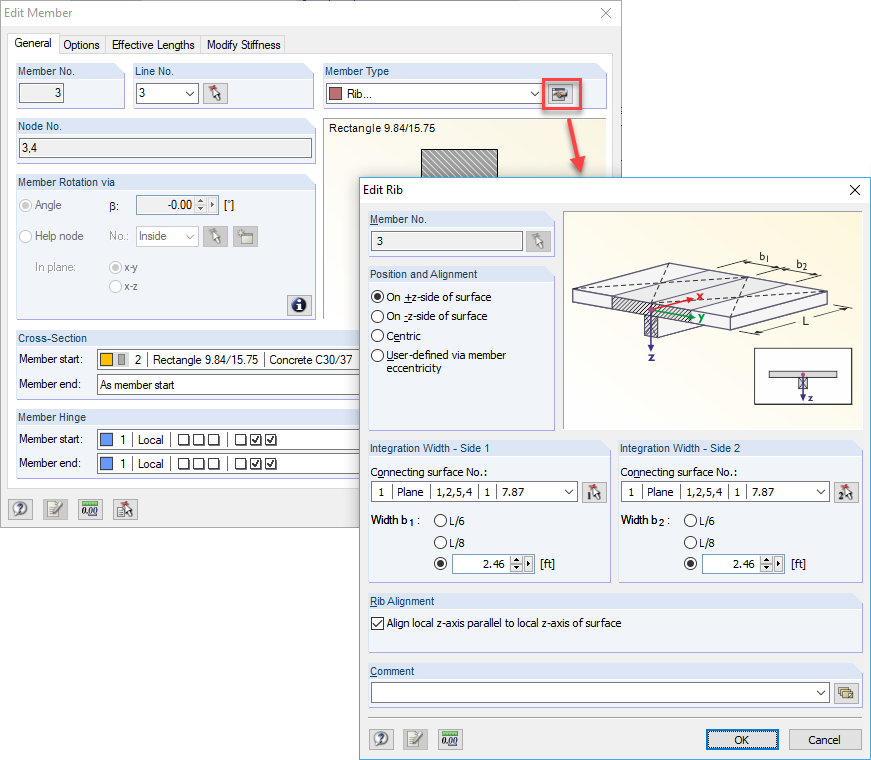 How are the internal forces for a downstand beam (rib) determined in RFEM?

For modeling downstand and upstand beams, the "Rib" member type should be used. First, it is necessary to define the downstand beam as a rectangular cross-section and the "Rib." In the dialog box for the details of the rib, you can specify an effective width. From the rectangular beam and the effective width, a resulting T-shaped section is created.

For 2D models, there are no axial forces in the members and surfaces, but only the internal forces Vz, MT, and My or mx, my, mxy, vx, and vy.

Therefore, another calculation method than for the 3D model is used for ribs: a T-beam (defined from member cross-section and effective widths) is placed with its centroidal axis in the surface axis.

If changing the effective width, the stiffness of the system changes too!

Also here, it is necessary to define the rectangular cross-section as a "Rib" member type with its effective width. However, the internal modeling is absolutely different: the eccentricity is calculated from half the plate thickness and half the member height.

For 3D models, the rectangular cross-section defined as a rib is connected eccentrically (half the plate thickness + half the member height) to the surface. Thus, the stiffness of the system is defined. It does not change when changing the effective width; the deformation of the system remains the same, not the internal forces.

The result is a beam moment relative to the T-shaped cross-section of the entire T-beam. With the rib internal forces, you can carry out a reinforced concrete design for the T-beam.

In the Display navigator, you can switch between the resulting internal forces of the rib and the member under "Results → Ribs."

The advantage of the more complex 3D rib model is that you can use it to consider the stiffnesses and internal forces more exactly.

If the integration width does not correspond to the effective width, you can adjust this for the calculation in the RF-CONCRETE Members add-on module.