Buckling of a member as plane load-bearing structure

Stress analysis on the plane load-bearing structure of a member

How can I perform a stability / buckling check on a tensile structure?

The Stability Analysis for plate structures can be converted into a pure stress analysis if the calculation is in quadratic theory and the imperfection required by the standard has been applied to the structure.

With the help of the RF-STABILITY and RF-IMP modules, you can create imperfections (or a pre-formed FE mesh). The type of imperfection depends heavily on the structural component and the standard used. For members that have been modeled as surface-tensioned structures, the values from DIN EN 1993-1-1: 2005 5.3 can be used. For plane surfaces, it is possible, for example, to use the values from DIN EN 1993-1-5: 2006 Annex C. For shells, the problem is much more complex and there are different approaches. I would advise against the generation of imperfections and perform the buckle integrity design by means of the MNA / LBA concept according to DIN EN 1993-1-6, which does not require the application of an imperfection.

For example, if you want to design the surface model of a steel beam, you can do the following:

1. Select a load with relatively high axial forces (compared to other internal forces in the load case), in most cases you can use the self-weight load case or a load combination with the corresponding self-weight. It may be necessary for each load combination to have an individual imperfection.

2. Calculate load combination according to the theory of one-order and use it as basis for RF-STABILITY

3. Find the first eigenform of a global failure with RF-STABILITY

4. Use the calculated mode shape as the basis for an imperfection with RF-IMP. It is possible to apply 1/300 of the beam length as amplitude, for example.

5. Generate a load combination that uses the generated imperfection as a basis and is calculated according to the linear deformation analysis.

6. Perform a stress analysis on the basis of this load combination which is also a stability analysis of the structure. 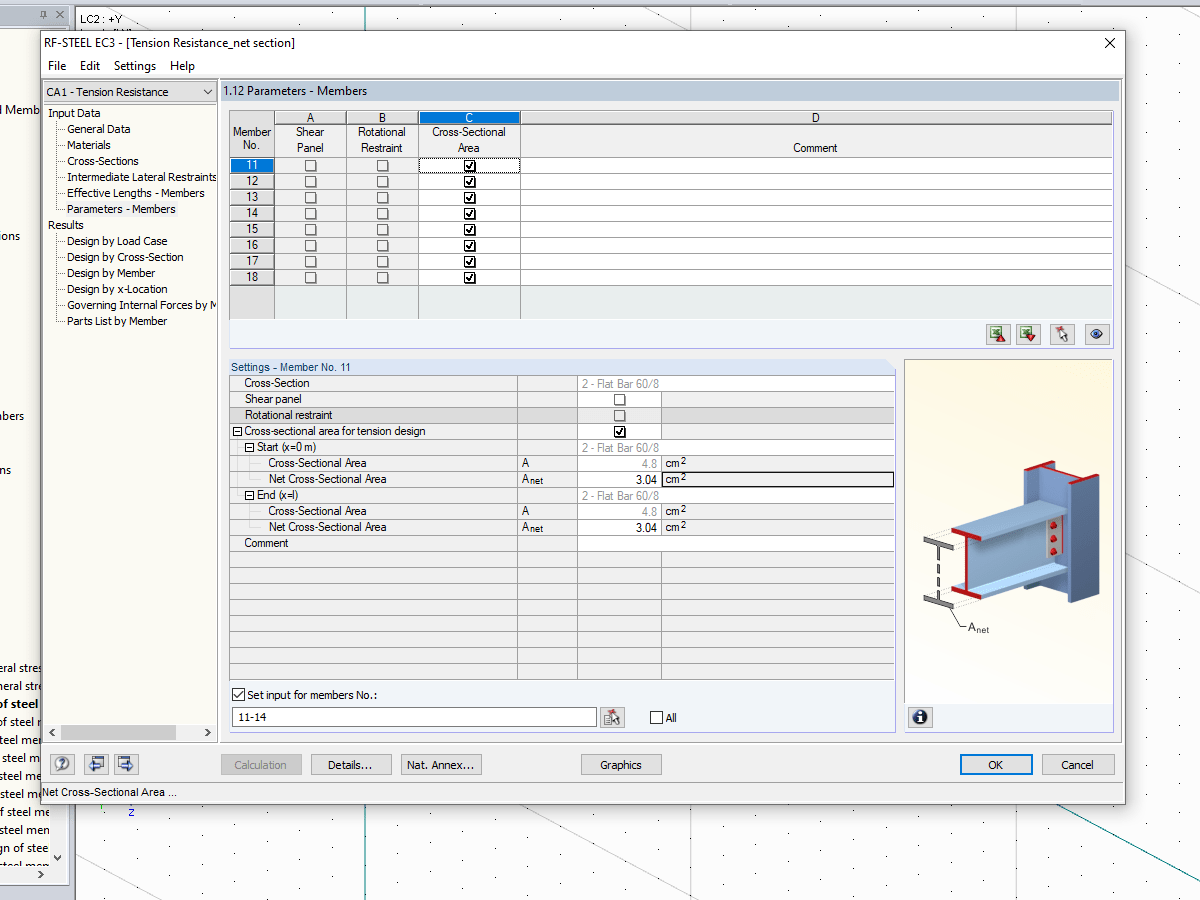 When connecting tension -loaded components with bolted connections, the cross -section weakening due to the bolt holes must be considered in the ultimate limit state design. The following article describes how the design of the tension resistance according to DIN EN 1993-1-1 can be performed with the net cross-section area of the tension member in the RF-/STEEL EC3 add-on module.

Extrusion of Surface Into Solid