Figure 01 - Cutting Pattern of Half Sphere

Cable and tensile membrane structures are regarded as very slender and aesthetic building constructions. The partly very complex double-curved shapes can be found using suitable form-finding algorithms. A possible solution is, for example, to search the form via the equilibrium between the surface stress (provided prestress and an additional load such as self-weight, pressure, etc.) and the given boundary conditions.

In addition to the form development, the production and preparation of the structural components to be assembled on the construction site is a key process. In this case, the engineer becomes a tailor. The great task is to create a double-curved membrane from many small planar cutting patterns as a whole structure subjected to the given prestress. The difficulty of this task becomes clear when trying to process a half orange in an imaginary model. Because of the radial and tangential curvature of the membrane skin, the half orange cannot be assembled from one planar part. It is only possible to decompose it into several planar parts.

Figure 01 - Cutting Pattern of Half Sphere

In addition to the development of the actual cutting pattern, this decomposition is also highly demanding. In the assembly, the cutting lines should be selected in such a way that each part has as much homogenous prestress state over the surface as possible in the 3D geometry, and thus a non-uniform elongation allowance is avoided during the flattening process. The smaller the partial unit, the more uniform the prestress distribution and elongation allowances. This approach requires free setting of the cutting lines for the partial units, independent of any initial entry and global membrane geometry. When positioning the cutting lines for the partial units, the following aspects must be considered:

After the flattening, the segmented 3D partial surface piece then results in the desired individual component for the assembly. The following aspects must be considered in the flattening process:

In practice, both work steps of defining the cutting line tracking and the subsequent flattening of the partial surfaces are referred to as cutting.

In addition to the cutting pattern development for membranes, there is also the assembly of cable elements. The form-finding process mentioned above searches for such a geometry that sets the given surface stress of the membrane and the given cable force or the resulting force of the given cable sags into equilibrium with the boundary conditions. Finally, this algorithm provides a new geometry with active forces. 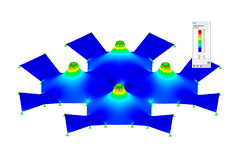 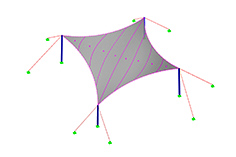