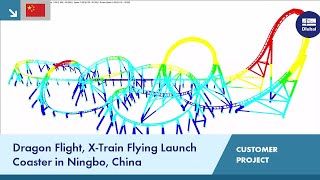 In many industrial sectors, China is the future market. This is also the case for the entertainment field in which the German company Maurer Söhne is working.The roller coaster Dragon Flight is being built for Romon U‑Park, an urban theme park in Ningbo. It is the first X‑Train Flying Launch Coaster designed by Maurer Söhne.

The roller coaster has a length of 504 m. Its seven roller coaster elements include three inversions. The X‑train has a capacity of 20 passengers. With top speeds of 90 km/h, the train reaches up to 4.5 g (g‑force) several times.

The base area is 113 m × 51 m. At the highest point of the coaster ride, which is called the top hat, a vertex height of approximately 30 m is reached. The overall structure consists of a tubular structure with 6,201 members and 86 cross‑sections.

The rail structure was calculated in RSTAB. Both model and wheel loads were directly imported from the dynamic simulation by using RS‑COM.

The analysis was performed according to Chinese and European standards. The analysis included ultimate limit state design and fatigue design.

The German engineers accessed the RSTAB results by using RS‑COM again for the fatigue designs. Then, the design according to EN 1993‑1‑9 and GB 50017 was carried out with post-processing programs.

RS-COM was used again to return the results of the post-processing programs to RSTAB in order to represent the results graphically on the rendering of the entire model. 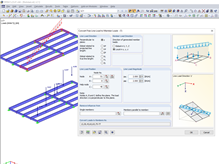 Not all structural elements of a real building are included in a structural model. As an example, we can look at a pipe that runs along a steel girder frame.
New Factor for Taking into Account Unloading of Soil Pressure New Interface with MS Excel/OpenOffice New Filter option for the result tables in the design modules New Targeted display of results in RF-/FOUNDATION Pro

Design of a control valve for a dam in the PACA region, France