I've got a mechanical system that behaves nonlinearly, and I want to analyze it via direct time step integration (in time range / dynamically). Which method is best used for this?

In RFEM 5 or RF-DYNAM Pro - Nonlinear Time History, there are two different methods (also called "solvers" hereafter) available to you for nonlinear, dynamic analyses: the explicit central difference method and the implicit NEWMARK method of mean acceleration (γ = ½ and β = ¼).

In the case of linear systems, the implicit solver is preferable in most cases, because numerically it is absolutely stable, regardless of which time step length is selected. Of course this statement has to be somewhat relativized, given the fact that if the time steps are selected too crudely, substantial inaccuracies in the solution are to be expected. The explicit solver also has only limited stability in linear systems; it becomes stable, when the selected time step is smaller than a specific, critical time step:

In this equation, Tn represents the smallest natural vibration period of the FE mesh, which leads to the following statement: The finer the FE mesh gets, the smaller the selected time step should become, in order to ensure numerical stability.

The calculation time of a single time step of the explicit solver is very short, but countless, very fine time steps may just be necessary to get a result at all. For that reason, the implicit NEWMARK solver for dynamic loadings that act over a long period of time, is preferable most of the time. The explicit solver is preferred, when you need to select very fine time steps anyway to get a useful (converging) result. This is the case, for example, in short-term and erratically variable loadings such as loads from shock or explosion. 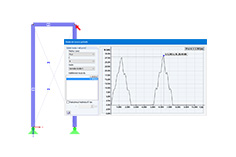