Determining Seismic Loads per Story by Means of Nodal Constraints 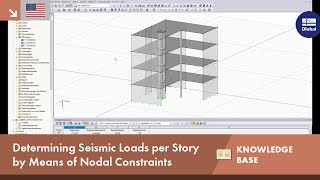 When introducing and transferring horizontal loads such as wind or seismic loads, there are increasing difficulties in 3D models. To avoid such issues, some standards (for example ASCE 7, NBC) require the simplification of the model by using diaphragms that distribute the horizontal loads to structural components transferring loads, but cannot transfer bending themselves (called "Diaphragm").

This article deals with the use of horizontal rigid diaphragms, which are mainly used for concrete floor slabs. This type of modeling offers several advantages. One of the advantages is that the calculation speed is significantly better, because the masses of each story are concentrated in one point. The results are transparent, can be evaluated story by story as well as be documented in a clearly arranged format.

RFEM offers the nodal constraints for this purpose. A nodal constraint establishes the relation between displacements and rotations between two or more nodes. Download the document which describes this option in detail below this article.

This article describes the use of rigid diaphragms in RFEM by means of an example. The structure is a 4-story building construction, which is regular in the front view, but not in the ground plan. The walls are hinged to the floor slabs.

Modeling the Rigid Diaphragm in RFEM

The masses of each single story are concentrated in its center of gravity. To determine it, select the "Center of Gravity and Info ..." function, which you can open by selecting all objects in the story using the shortcut menu. With this option, you can generate a node in the story's center of gravity. Also use this option to determine the mass of the story at the same time. These masses are listed in the table below. The generated nodes for each story must then be moved to the diaphragm of the floor slabs (modification of the Z-coordinate).

In this example, additional permanent loads, imposed loads, and snow loads on the surfaces were defined. To be able to consider them later, you have to convert them into a total mass per story.

When all masses have been documented, the floor slabs (including all openings and line hinges) can be deleted and replaced with nodal constraints. It is recommended to divide the connection lines of the walls by means of nodes so that the connection can be modelled more realistically. In this example, we chose the distance of a finite element. Entering the nodal constraint is shown in Figure 02. We select "Diaphragm Constraint" as type. Make sure that you also select the center of gravity of each story.

In order to be able to evaluate the results at the nodes of the centers of gravity later, coupling members (hinge-hinge) are defined, each vertically from the center of gravity of a story.

If the nodal constraints are defined, you can enter the masses in the RF-DYNAM Pro add-on module. For this purpose, three mass cases are created in which only manually defined nodal masses are entered (masses as listed in the table). The masses are applied to the center of gravity of each story.

In the following, the response spectrum analysis with generation of equivalent loads will be used. The natural vibration analysis is performed with eight eigenvalues for the X- and Y-direction. With these settings, all available mode shapes are calculated, which are all also used for the response spectrum analysis. Thus, you get an effective modal mass factor of 1.0 in both directions.

The first two mode shapes are identical with respect to their direction in the two considered models and differ only slightly in the natural frequencies. In Figure 03, the conventional model with floor slabs is shown on the left and the model with the nodal constraints is shown on the right. The first mode shape is displayed.

To evaluate the results of the response spectrum analysis, it is useful to model a result beam, as explained in this article. The results are listed in the following table. For this example, only the X-direction is shown (result combination: result envelope X).

The results differ slightly, whereas the model with the nodal constraints has larger forces or deformations especially at the top floor, which are slightly smaller at the lowest floor.

This modeling represents a simplification of the entire system and has advantages in terms of performance, further processing, and traceability. For most seismic analyses, this method is very well suited and represents an alternative to the conventional method.